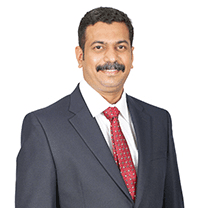 He is the consultant General Surgery

He has completed MBBS , MS, FMIS
Years of Experience: 12 yrs.

R. Ganesh Shenoy K, an understudy of Dr.Ramesh, completed his undergraduate studies at Mysore Medical College, the first Medical College in Karnataka and his Post Graduate training in General Surgery at Goa Medical College. After completing his post graduation, he continued as a senior resident in General Surgery at Goa Medical College. He then completed his Fellowship in Minimal Invasive Surgery(FMIS) from the prestigious Rajiv Gandhi University Of Health Sciences(RGUHS). In addition to being a former Executive Committee member of the Surgical Society of Bangalore, he is currently a member of several medical societies in India and Asia Pacific. He has also presented various papers and videos at numerous State, National and International conferences and was a part of Live Operative workshop in many National and State level meetings. He has received the Best Video Presentation Award at the 20th Biennial National Conference of the IAGES in Ahmadabad. He was also the Joint Organizing Secretary of the OSSICON 2013 conference, the conference and live operative workshop of the Obesity and Metabolic Surgery Society of India. His special interests are in the field of Laparoscopic Hernia Surgery, Laparoscopic Foregut surgery and Bariatric surgery.